Clarence Hamer doesn’t expect to hang on to his house much longer.

His downstairs tenant owes him nearly $50,000 in back rent on the four-bedroom duplex he owns in Brownsville, Brooklyn. Without those rental payments, Hamer has been unable to pay the thousands he owes in heat, hot water and property taxes. In September, after exhausting his life savings, he stopped paying the mortgage, too.

“I don’t have any corporate backing or any other type of insurance,” said Hamer, a 46-year-old landlord who works for the city of New York. “All I have is my home, and it seems apparent that I’m going to lose it.”

America’s mom-and-pop landlords, along with their tenants, have been dangling by a thread for nine months. Now, with Congress still deadlocked over the contours of a second pandemic stimulus package, they are entering a new housing abyss, a perilous period of pandemic limbo as the last of the safety nets are set to expire.

The day after Christmas, the extended unemployment benefits that have kept 12 million people and their families afloat are scheduled to expire. Then, mere days after that cliff, on New Year’s Day, a national ban on renter evictions from the Centers for Disease Control and Prevention is also set to lapse.

Overnight, an unprecedented bill of $70 billion in unpaid back rent and utilities will come due, according to estimates by Moody’s Analytics Chief Economist Mark Zandi. In all, up to 40 million people could be threatened with eviction over the coming months, research from the Aspen Institute says.

Much of the focus has been on tenants. But Stacey Johnson-Cosby, president of the Kansas City Regional Housing Alliance, says more than 40% of the landlords surveyed in her coalition said that they expected to have to sell their units in the coming months due to rental income losses.

“They are sheltering our citizens free of charge and there’s nothing we can do about it,” said Johnson-Cosby. “This is their retirement income.”

She added that small landlords are also terrified of speaking out for fear of drawing the ire of tenant rights groups who promote “Cancel Rent” and have bombarded landlords with publicity campaigns featuring their pictures and barricades at apartment buildings and local courthouses.

“What they don’t realize is that if they run us out and we fail, it will be private equity and Wall Street firms that buy up all our properties, just like they did with houses after the last foreclosure crash.”
–

During this same interview, Bill Gates admitted something that we, too, have reported on: that influenza vaccines are pretty much useless in older people. Though supposedly high-risk seniors are pushed to get their flu shots annually, Gates confessed to the fact that this yearly ritual does nothing to protect them against the flu.

“THE EFFICACY OF VACCINES IN OLDER PEOPLE IS ALWAYS A HUGE CHALLENGE,” GATES STATED. “IT TURNS OUT THE FLU VACCINE ISN’T THAT EFFECTIVE IN ELDERLY PEOPLE. AND THAT ACTUAL DECISION OF, OK, LET’S GO AND GIVE THIS VACCINE TO THE ENTIRE WORLD, GOVERNMENTS WILL HAVE TO BE INVOLVED BECAUSE THERE WILL BE SOME RISK AND INDEMNIFICATION NEEDED.”

Vaccine experiments like the ones Gates is pushing for the Wuhan coronavirus (COVID-19) have been tried before, by the way. Back in the ’70s, the United States rolled out a vaccine for “swine flu” that was administered to some 45 million people over the course of 10 weeks.

This vaccination effort was halted, however, after it was discovered that no cases of swine flu were even detected outside of the military base where it was said to have originated. Meanwhile, one in 100,000 vaccinated individuals ended up suffering from side effects that included Guillain-Barré syndrome, while another 53 died.

Because of the horrors caused by this vaccination campaign, Guillain-Barré is supposedly monitored every single flu season to ensure that influenza vaccine safety meet certain safety thresholds.

“The side effect of treason is lead poisoning or rope burn, but not usually both,” joked one Big League Politics commenter in reference to Bill Gates. John the Baptist paved the way for Jesus,” wrote another. “Bill Gates is paving the way for the antichrist.”
–

Many cheating women disconnect with their partners and become distant. If your wife shows a distant, yet aggressive, attitude toward you and her usual routines start to dissipate, you need to consider she might be sleeping around on you.

If she seems irritated with you constantly and hardly looks at you, it’s a telltale sign she is making magic on the outside. She really doesn’t need you anymore because she’s apparently found what she needs in another man’s arms.

How else are you going to explain this behavior toward you? Read More!!
–

Deepgram leverages deep learning and has already raised a few million in capital in its five-year existence. Other investors that joined the funding round include Nvidia, Y Combinator and SAP.

The startup wants to use the investment to create new job opportunities in go-to-market and engineering, and expand its team from its current 40 members to an undisclosed number. It also wants to purchase some new hardware, as it runs its own service for better margins, which also makes it a natural partner for Nvidia. The service can also be run by customers on-premises.

Deepgram says its speech recognition tool solves the accuracy problem and supports real-time text input, and is suitable for tech and large enterprises such as call centers and voice platforms.

A number of AI startups such as Otter.ai have already been working on improving speech recognition tools by breaking a sound file into words, but accuracy remains a challenge.

In an interview with TechCrunch, Deepgram CEO Scott Stephenson said they are not looking to upgrade existing tech, but instead built from the ground up a deep learning tool with enhanced accuracy. The service can either be hosted on its hardware or on client hardware.
–

As the Pfizer vaccine’s unique mRNA sequence continues to encode for spike proteins in the cells throughout the body, a precarious situation is created. If a person is infected by natural coronaviruses in the future, the immune system will likely attack these cells with aggression, causing inflammation in the areas of the body where coronaviruses attach. Because SARS-CoV-2 readily targets humans through the vascular endothelium through the ACE-2 receptor, vaccine recipients are at risk of developing cardiovascular inflammation and complications long after they are vaccinated. The new mRNA technology trains the body’s cells to produce the spike proteins, but it is unknown how long the cells will continue this simulation. Complications like myocarditis and thromboembolism (formation of a blood clot inside a blood vessel), could occur long after vaccination if the person is later exposed to SARS-CoV-2 and it permeates the vascular endothelium.

The East Coast has just experienced its first nor’easter of the season. And this first winter storm has even intensified into a bombogenesis!

New England was in the eye of the cyclone with 70 mph sustained winds and reports of widespread power outages in Maine (200,000) and New Hampshire (60,000).

Up to one foot was reported in Wolfeboro, New Hampshire and Paxton, Massachusetts. 17.9 inches of snow fell on Mount Washington, New Hampshire.
–

FROM NATURAL NEWS: The Microsoft co-founder and prominent eugenicist has been more outspoken in recent days than perhaps ever before about his desire to vaccinate the entire world, in this case as soon as possible for the Wuhan coronavirus (COVID-19). And the reality is that many more will die from the vaccine than from the virus itself.

Speaking during a recent segment on CNBC, Gates admitted that in order to make vaccines “work” for the most vulnerable groups, they have to be super-charged, in a sense. And this super-charging means that some people are going to be injured or killed as a result.

“WE CLEARLY NEED A VACCINE THAT WORKS IN THE UPPER AGE RANGE BECAUSE THEY’RE MOST AT RISK OF THAT,” GATES STATED ABOUT HIS PLANS FOR WUHAN CORONAVIRUS COVID-19 VACCINATION. “AND DOING THAT SO THAT YOU AMP IT UP SO THAT IT WORKS IN OLDER PEOPLE, AND YET YOU DON’T HAVE SIDE EFFECTS, IF WE HAVE ONE IN 10,000 SIDE EFFECTS THAT’S WAY MORE, 700,000 PEOPLE WHO WILL SUFFER FROM THAT.
–

It’s not even winter and we are experiencing extreme stormy blizzards and cyclonic depressions in most parts of the world. It’s as if we had entered the ‘geologic timescale’ of weather warfare.

Now, do you feel it? Do you feel how they try to control the weather? Here the latest examples of weather modification! Over the weekend, two weather bombs blasted Alaska (a double bombogenesis!) and New England, while a third vicious blizzard is currently dropping meters of snow on the Alps across Europe.

And I forecast this insane extreme weather is going to rage out-of-control over the next few years… But now let’s discuss what happened on both US coasts and in the European Alps.
–

“We clearly need a vaccine that works in the upper age range because they’re most at risk of that,” Gates stated about his plans for Wuhan coronavirus (COVID-19) vaccination. “And doing that so that you amp it up so that it works in older people, and yet you don’t have side effects, if we have one in 10,000 side effects that’s way more, 700,000 people who will suffer from that.”

Boanerges
In his rush to develop one, two, or even seven different vaccines for the Wuhan coronavirus COVID-19, billionaire software tycoon Bill Gates openly admitted that upwards of 700,000 people could become injured or die from these jabs.

Isn’t it interesting that Bill Gates is pushing a COVID-19 coronavirus vaccine that he freely admits will seriously injure or even kill upwards of 700,000 people while at the same time saying what a great thing it will be when everyone is forced to take it? You can’t make this stuff it, you really can’t.

Why on earth anyone would want to take a vaccine from population control advocate Bill Gates before this revelation is beyond me, but to hear that 700,00 will be hurt or killed from the shot and still want to take it? Complete and total insanity.
– 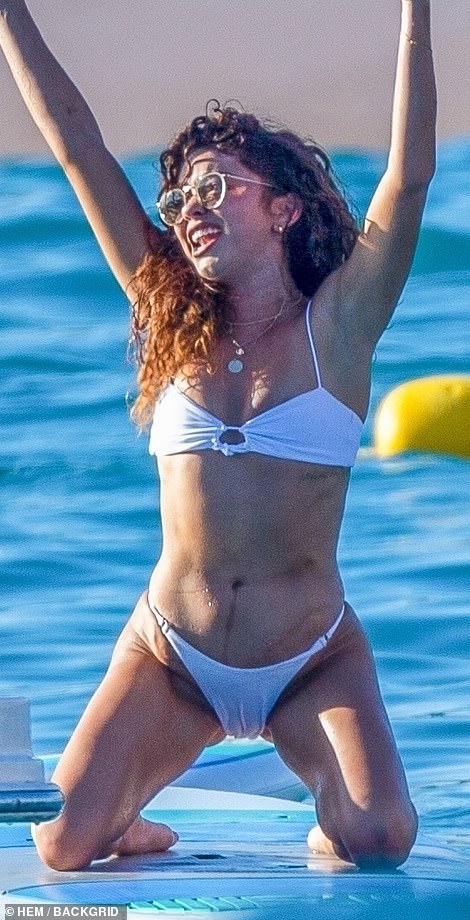 Wells, meanwhile, raised his canned beverage into the air whilst flexing his muscles.

Everyone seemed to be having the time of their life hanging out with one another over cool drinks and with a beautiful view to boot.

Overcome with happiness, Sarah at one point playfully lunged upon the deck of her boat with her hands raised high into the air.

Wells, meanwhile, raised his canned beverage into the air whilst flexing his muscles.

Everyone seemed to be having the time of their life hanging out with one another over cool drinks and with a beautiful view to boot.

Friends grinned from ear-to-ear as they lounged about the deck in their own stylish swimwear.

At one point, the group took their party out onto the water, where Sarah paddled out into the ocean blue with her board.

The actress struck an array of yoga-esque poses, and straddled the board as she bobbed about the water and admired the serene views.

The party definitely was a welcome escape for Sarah and her friends, who have all been cooped up throughout the pandemic.
–