Since 1970, the anomaly has been growing in size, as well as moving westward at a pace of approximately 20 kilometres (12 miles) per year. But that’s not all.

New readings provided by the ESA’s Swarm satellites show that within the past five years, a second centre of minimum intensity has begun to open up within the anomaly.

This suggests the whole thing could even be in the process of splitting up into two separate cells – with the original centred above the middle of South America, and the new, emerging cell appearing to the east, hovering off the coast of southwest Africa.

“The new, eastern minimum of the South Atlantic Anomaly has appeared over the last decade and in recent years is developing vigorously,” says geophysicist Jürgen Matzka from the German Research Centre for Geosciences.

“The challenge now is to understand the processes in Earth’s core driving these changes.”

Just how the anomaly will develop from here is unknown, but previous research has suggested disruptions in the magnetic field like this one might be recurrent events that take place every few hundred years.

Whether that’s what we’re witnessing now isn’t fully clear – or how a split anomaly might end up playing out – but scientists are watching closely, as are we.
–

New satellite data from the European Space Agency (ESA) reveal that the mysterious anomaly weakening Earth’s magnetic field continues to evolve, with the most recent observations showing we could soon be dealing with more than one of these strange phenomena.

The South Atlantic Anomaly is a vast expanse of reduced magnetic intensity in Earth’s magnetic field, extending all the way from South America to southwest Africa.

Since our planet’s magnetic field acts as a kind of shield – protecting Earth from solar winds and cosmic radiation, in addition to determining the location of the magnetic poles – any reduction in its strength is an important event we need to monitor closely, as these changes could ultimately have significant implications for our planet.

At present, there’s nothing to be alarmed about. The ESA notes that the most significant effects right now are largely limited to technical malfunctions on board satellites and spacecraft, which can be exposed to a greater amount of charged particles in low-Earth orbit as they pass through the South Atlantic Anomaly in the skies above South America and the South Atlantic Ocean.

Not that the magnitude of the anomaly should be diminished, though. In the last two centuries, Earth’s magnetic field has lost about 9 percent of its strength on average, the ESA says, assisted by a drop in minimum field strength in the South Atlantic Anomaly from approximately 24,000 nanoteslas to 22,000 nanoteslas over the past 50 years.

Exactly why this is happening remains a mystery. Earth’s magnetic field is generated by electrical currents produced by a swirling mass of liquid iron within the outer core of our planet, but while this phenomenon appears stable at any given moment, over vast timescales, it’s never really still.

That process could actually occur more frequently than people think, but while scientists continually debate when we might next witness such an event, even the regular, wandering movements of Earth’s magnetic poles keep geophysicists guessing.

In any case, it’s not fully clear how those reversals might be tied to what’s currently going on with the South Atlantic Anomaly – which some have suggested could be caused by a vast reservoir of dense rock underneath Africa called the African Large Low Shear Velocity Province. More Information Here!!
–

The strange events of Rendlesham forest in December of 1980 have become well known throughout major UFO seeker communities. Less well known are the personal stories and official reports filed by the people who bore witness to the aerial lights on those strange nights. Linda Moulton Howe begins an extensive exposé concerning the strange events of RAF Bentwaters/ Woodbridge which includes her personal interviews with eyewitnesses, a hypnosis session with contactee John Burroughs, and an examination of official reports from those who were there.
Source Gaia
–

Justen Faull is a filmmaker and producer for Faull Brothers Productions, Best known for his films “Higher Entities”, “Belly of the Beast”, and “The Hollow Earth Chronicles”. In this interview, we talk all about UFOs, Aliens, Underground Bases, and Fallen Angels.
Source: End Times Productions
401K subscribers
–

We live in a world of lies pushed on us by the upper levels of the world controllers. It is easier to lie to someone than to convince them they have been lied to especially when they are unknowingly addicted to the fear. If the FOUNDATION of your world belief is that you are on a spinning water globe pear rocket flying through an infinite space vacuum, then you will not know WHO you are, WHERE you are and WHAT you truly are. You will be lost and feel insignificant not KNOWING that you are at the center of creation rather than on a speck of dust in an ever expanding universe.

With that belief you can be convince of anything. To wake up you MUST start with the foundation of your world and from there you can see beyond the imaginary curve.

The FLAT EARTH SUN, MOON & ZODIAC CLOCK app is the best tool for discovering flat earth and introducing it to friends and family. It visually shows how the sky is a perfect clock and brings you the latest google censored flat earth content.

The FAQ page will answer all your questions on how and why flat earth is hidden. Got a reason you think Flat Earth is impossible, we have an answer that you haven’t thought of yet.

Take the FE Clock challenge. Watch the featured video every day for 2 weeks and see what happens.

MEDIA INQUIRES: info@TheFlatEarthPodcast.com
If you are a show host and think Flat Earth is stupid and impossible, let’s do a Q&A on your channel.

The countdown to UFO Disclosure has begun! The Pentagon has 4 months to reveal what it knows about UFOs.
–

Plz visit eyewitness “Renee’s Thrifty Den” at https://www.youtube.com/watch?v=BFpPs…​
Eyewitness states: I took the video on Tuesday, January 26, 2021 around 6:15 P.M My fiance and I were driving to our friends house in East Texas, not far from our own home. I was of course doing something on my phone when my fiance said “Hey, look up”…. & as soon as I did, I automatically seen it. There was a face clear as day in the clouds or cloud…. I was in total shock as to what I was seeing before me. It was shocking, creeping wow moment. It even seem to have eyes inside as if it was watching us. I seen videos of this anomaly but never experienced one. I’ve always been a believer of anything paranormal or unusual unexplained happenings but this set it in stone for me.
–

Declassified documents and intelligence briefings aren’t the only frontiers in our search for extraterrestrial revelations – answers could come from the cosmos itself.

Which is one of the reasons why scientists can’t wait for the launch of the $10billion (£7.3billion) James Webb Space Telescope (JWST) in October this year.

The powered-up successor to the Hubble Telescope will scour the heavens looking for light from the first stars to form after the Big Bang.

And the search could throw up some interesting possibilities as to the question of intelligent life out there in space.

“It’s not designed specifically to look for alien life, but it will help with that search – it will find, for example, more exoplanets [planets around stars outside of our solar system],” Nick says.

If exoplanets have oceans, for instance, that could make it more likely that life exists there.

But just like the appearance of the Navy pilot videos, Nick suspects if a major breakthrough does come in 2021, it could come without any warning at all.

“We know some of the things that are coming,” Nick says. “What we don’t know is what the unexpected bombshells are going to be – and they’re very often the biggest ones of all.

“If ever there’s a time for a bombshell, it’s probably right now.”
– 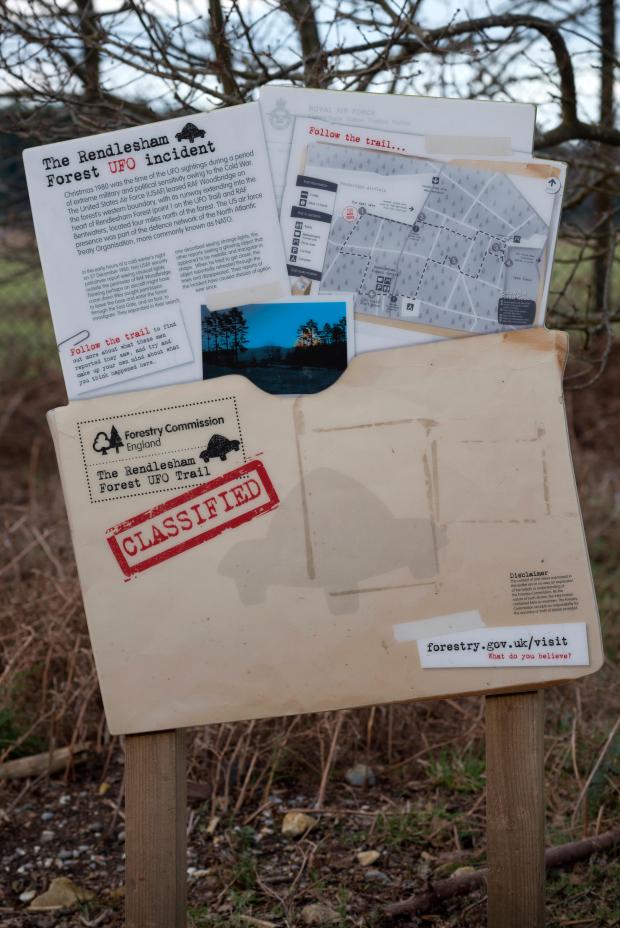 In his own work investigating UFOs for the British government, Nick saw some fascinating cases – like the Rendlesham Forest incident in 1980, or the mysterious Calvine pictures snapped in Scotland.

At Rendlesham, often referred to as Britain’s Roswell incident, United States Air Force members stationed in the UK claimed to have seen UFO lights in the sky.

But despite the intriguing evidence, Nick says there was no actual smoking gun proving aliens were real – but that could all be about to change.

“I’m tracking these developments very closely and I think everything that’s going on in the US right now is the most compelling evidence I’ve seen,” he says.

“Even though it’s not definitive, the Navy videos, the Senate Intelligence Committee’s demand for a report, Trump’s hints… it’s like there’s a quickening of the pace.

“Taken individually, none of these things is necessarily going to prove anything.

“But taken collectively, it pushes us tantalisingly close to the line.”
–